Bagan is an ancient city located in the Mandalay region of the country of Myanmar. Today, it is a tourist hot spot and a temple tourers paradise.  Which is the reason we’re here to give you the top 10 must see temples and pagodas in Bagan, Myanmar.

10 Must See Temples and Pagodas in Bagan, Myanmar

Historically, Bagan is known for being home to over 10,000 Buddhist temples and pagodas and being the first kingdom to unify the regions that make up the modern day Myanmar. Of the 10,000 pagodas and temples, a little over 2,000 remain standing. The centuries of conflict and natural disasters have paid a toll on this place making Bagan a one-of-a-kind destination and a UNESCO World Heritage Site.

There are two types of architectural styles that make up the remaining 2,000 pagoda’s and temples of Bagan 1) stupa style and 2) gu-style. The stupa style is a massive, solid structure that typically houses a relic of some kind. Where as gu-style is more hollow making it’s purpose more for meditation and worship.

The 10 Must See Temples and Pagodas in Bagan

We know what you’re thinking, “2,000 TEMPLES AND PAGODAS!!” We thought the same thing but lucky for you, we got you. Get our list of the top 10 must see temples and pagodas when in Bagan, Myanmar.

Constructed in 1057 this Buddhist pagoda has five stone terraces with a stupa situated on top of those terraces. The pagoda was built by King Anawrahta, who is believed to be “the father of the Burmese nation.”

Why is this pagoda so significant? It’s rumored to house the hairs of Gautama Buddha. 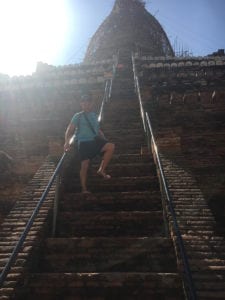 One of the highest temples on the plains of Bagan, Thatbyinnyu stands just over 60m (229ft) tall, and can be seen from almost anywhere on the plain. Built in 1144, this temple is a beauty and one of the first two-story temples built in Bagan. 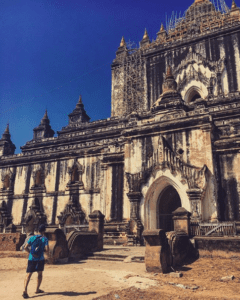 While this pagoda may not be the most impressive, the views around it are. Located on the banks of the Ayeyarwady River, this gilded, dome shaped pagoda is unlike any that you’ll see on our list.

Originally constructed between the years of 168 to 248 AD, the 1975 earthquake completely cracked the structure causing it to fall into the river below. Reconstructed back to its full glory Bu (pumpkin/gourd in Burmese) Paya (pagoda in Burmese) shines on. 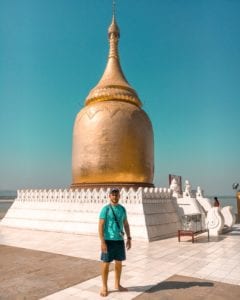 Built in 1113 AD, Gubyaukgyi Temple is a must for all those history buffs and ruin enthusiasts. Gubyaukgyi is probably one of, if not the most important temple tied to Myanmar’s past.

This temple not only houses a wide array of well-preserved frescoes (murals) that line the interior walls. It also has helped crack some linguistic codes around the earliest languages spoken in Myanmar. We’ll talk about the frescoes first.

These frescoes are among the oldest to be discovered in There are about 547 of these frescoes that all depict stories, legends and historical chronicles of Bagan’s past. On these frescoes, captions are written in “Old Mon” which has supplied archeologists with the earliest examples of written language in Myanmar.

In addition to Old Mon, Pali, Old Burmese and Pyu inscriptions were found on two pillars. These four languages are considered some of the most ancient Southeast Asian languages and due to their discovery, has  now played a critical role in cracking the Pyu language. So yeah, this temple is like Myanmar’s Rosetta Stone. It has a lot of significance and plus, it’s pretty. So, overall, a win-win. 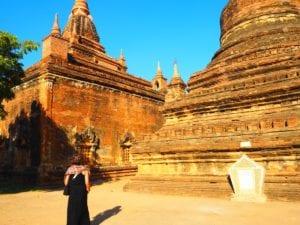 Of the pagodas on our list, Shwezigon Pagoda is, in our opinion, is what people expect pagoda’s to look like when visiting Southeast Asia. The shape, color and overall build are very similar to other pagodas found in other countries in Southeast Asia. Does that mean you should miss it? No. Shwezigon Pagoda is a big, beautiful gilded pagoda that is surrounded by smaller shrines and various temples.

This Buddhist pagoda is believed to house a tooth and bone from Gautama Buddha. The detail of this pagoda is seriously impressive. As you walk around, you’ll run into locals worshiping and monks praying. 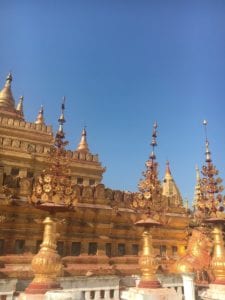 Pyathadar Temple, also known as Pyathatgyi, is a massive brick temple that was constructed during the 13th A staircase leads you to the top terrace where you have great view of the plains of Bagan and its temples and pagodas.

An added touch, which made us feel like we were transported back in time, are the candles that line and light your way up the staircase. This temple is a popular place to watch the sun set on Bagan. To miss this temple would be a big mistake. 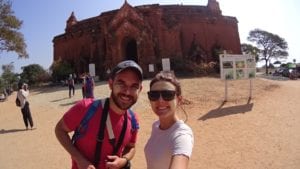 One of our favorite temples is Sulamani Temple. One of, if not the most visited temple in all of Bagan is Sulamani. After King Narapatisithu unearthed a small ruby, a temple was constructed in 1183 on the site where the ruby was found.

The temple was named Sulamani which means small ruby. Sulamani Temple is a beautiful, multi-tiered temple that has a massive entrance on each side. The temple has many depictions about the previous life and teachings of Buddha.

Another one of our favorite temples is Ananda Temple. This beauty is one of Bagan’s most known and most visited temples and for good reason! Built in 1105 AD, Ananda is considered one of the first great temples built on the plains of Bagan. Built with bricks and plaster, the stark white is an unusual yet impressive sight after you’ve been staring at brown bricked temple ruins all day.

The inside of Ananda is nothing short of amazing. From frescoes of Buddha painted on the walls to the four massive golden Buddha’s that welcome you at each entrance, Ananda is an absolute must see for anyone visiting Bagan. 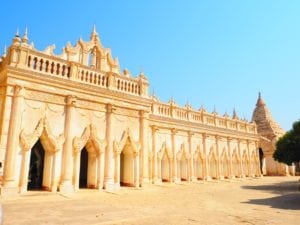 The best sunset in Bagan as we like to call this temple. North Guni Temple or Myauk Guni is a temple built in 1241 AD by Queen Pwasaw.

This temple boasts amazing views of the plains of Bagan and is often the less crowded of the sun set viewing options in Bagan – but who knows how long that will last. Better hurry your butt up and get there soon! 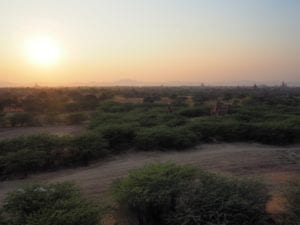 However, like North Guni, it is growing in popularity. Law Ka Ou Shaung not only gives you excellent view of those hot air balloons lifting off, it also gives you amazing sunrise views of Shwesandaw Pagoda too. That is all. Enjoy! 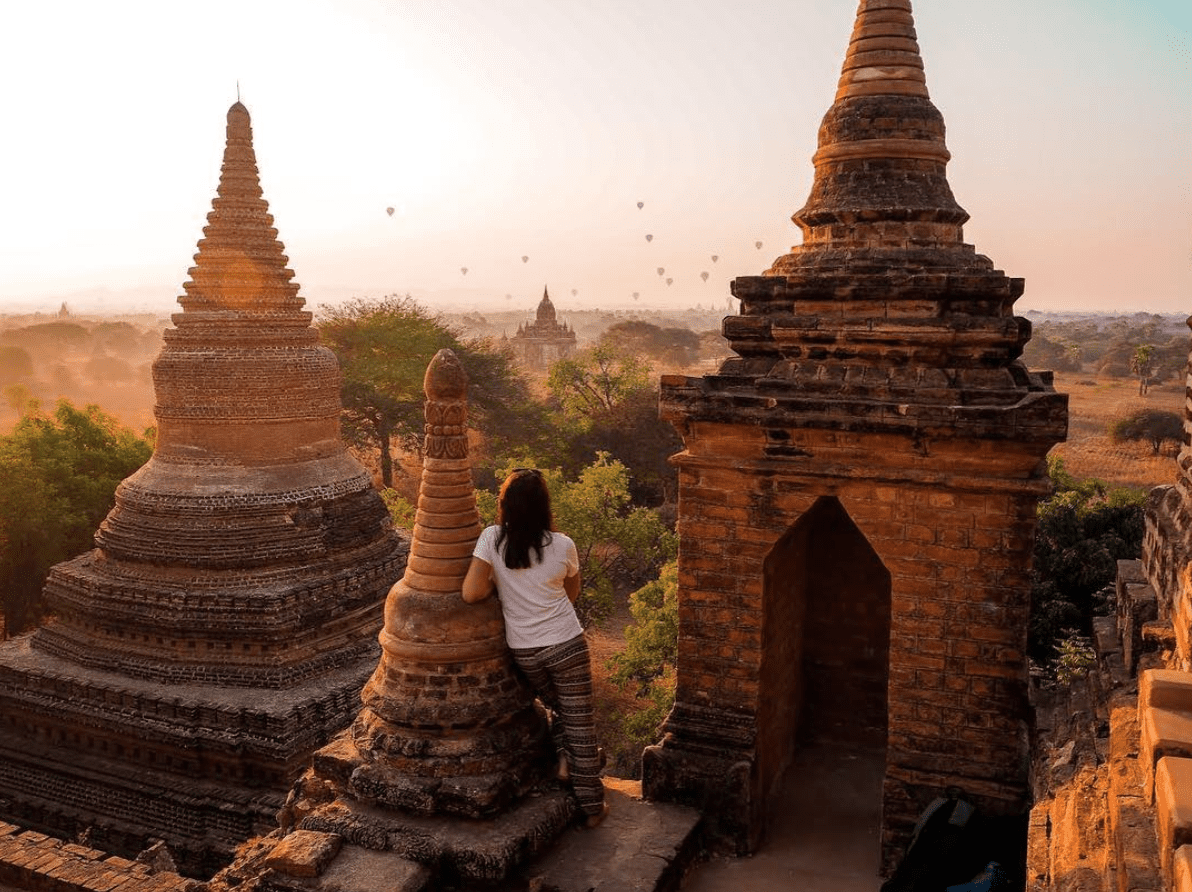 Where To Stay in Bagan, Myanmar

For The Budget Conscious: Located in Old Bagan, Ostello Bello offers both private and dormitory rooms and free pasta. Yes, free pasta! The location is amazing, the beds are comfy and the vibe is perfect.

For Something In Between: Look Myanmar is warm. welcoming and oh so friendly bed and breakfast. The location is great, well taken care of and walking distance to other shops and restaurants.

For more places to stay in Bagan, Myanmar, you can check out the latest places and prices here.

Things To Do In Bagan, Myanmar

Getting To Mandalay from Bagan by Boat

Train Ride From Yangon To Bagan 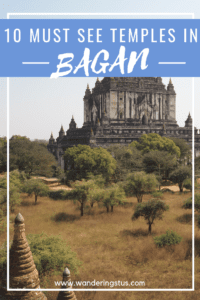 For more travel tips, guides and awesome travel shots, be sure to poke around our site, follow us on Instagram @wanderingstus, Pinterest and on Facebook. Oh, and if you have any questions, let us know in the comment section. We’re happy to answer. Or, just leave us a positive note!

This site uses Akismet to reduce spam. Learn how your comment data is processed. 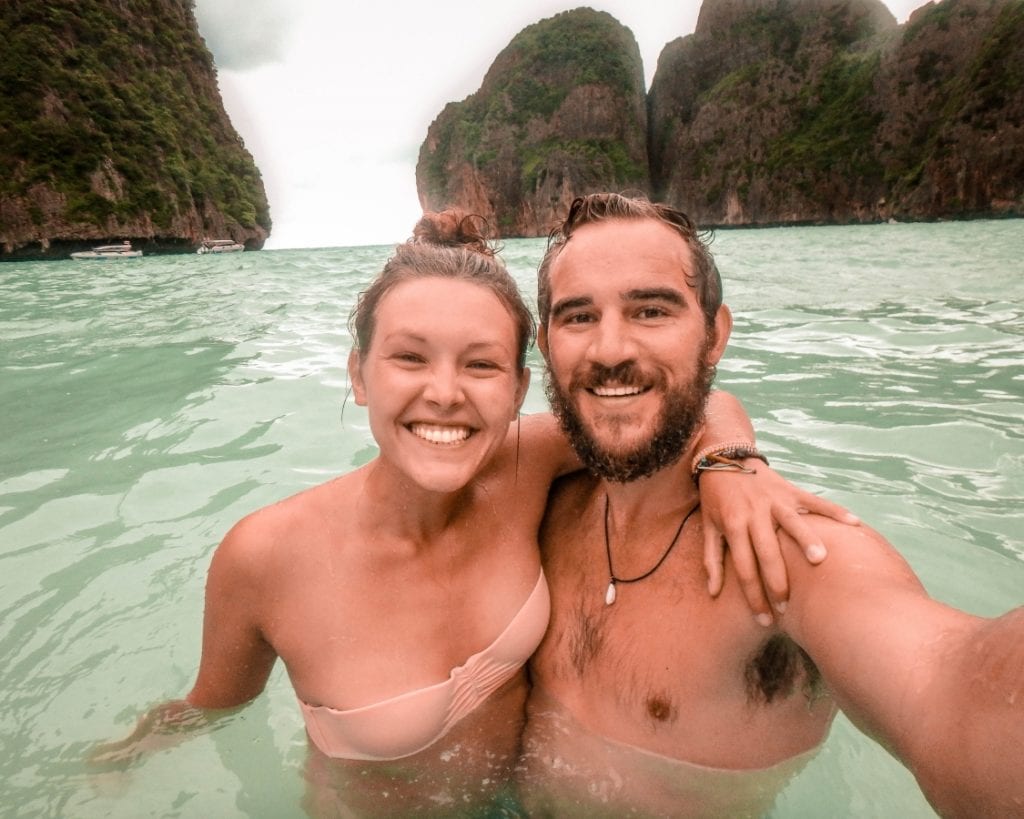 We’re Lauren & Jesse Stuart aka The Stus from the Wandering Stus! We’re a free-spirited travel couple whose appetite for adventure and far away places fuel our wanderlusting souls. Travel is necessary and we have every intention to roam beautifully. 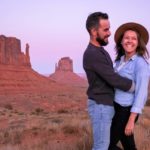 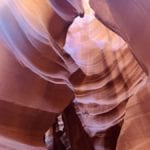 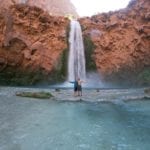 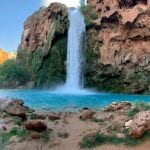 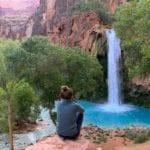